⒈ Adoption: An Argument Against Abortion 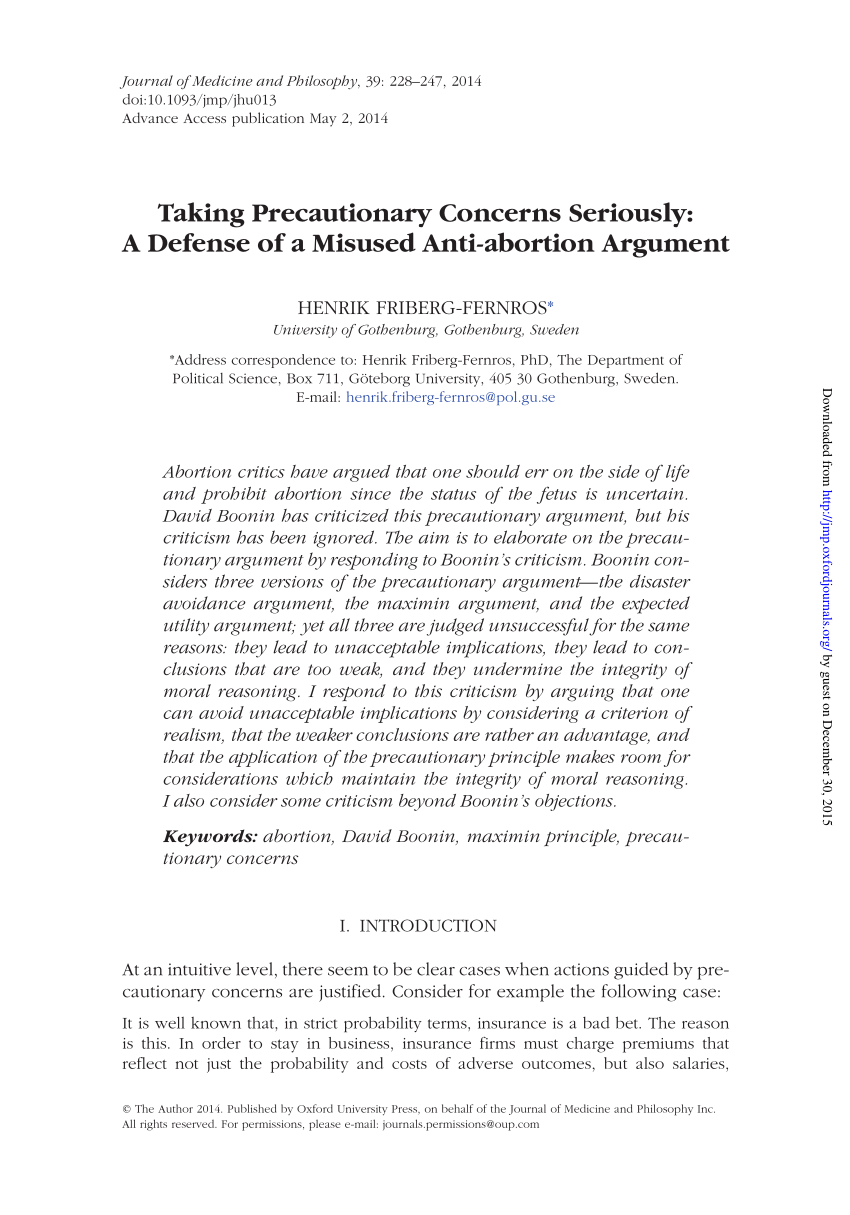 In the case of rape, it would be lacking in compassion to deny a woman the right to an abortion. The woman might be too young, or have work or family commitments which make bringing up a child difficult or impossible for her. The pregnant woman's health and welfare are more important than that of the embryo or fetus. The pregnant woman's life is more important than that of the embryo or fetus. The embryo or fetus does not have the same rights as the mother. The quality of life of the unborn child or the woman's existing children could be adversely affected by the birth. Stopping legal abortions would mean a return to 'back street' abortions, causing a great deal of suffering to the health and wellbeing of the woman.

Abortion could therefore be the lesser of two evils. Arguments against abortion Roman Catholics believe that life begins at conception. Some Protestants believe that life begins after the first 14 days. The embryo is a living human being from this point, and so an abortion would be murder. Or maybe they were hoping to end an existing relationship and worry that a child could make their exit difficult. In both situations and many others, the people who say they want an abortion cite factors from after the pregnancy is over, factors having to do with child support, shared custody, developmental delays, resource limitations, and the like.

Few people, by contrast, say they want an abortion because they wish to avoid the burdens of pregnancy itself. The reason people want an abortion is important. If people tend to cite post-pregnancy factors, as they often do, then we can perhaps conclude that what is really bothering them is the responsibilities entailed in having a child rather than the physical and emotional burdens involved in carrying a pregnancy to term and giving birth. They have, in that sense, the same complaints about an unwanted pregnancy that the father might have. He too might not want another child or this child or a child with this co-parent.

If the problem is the child rather than the pregnancy, then adoption could solve the problem. Imagine the following hypothetical conversation between a pro-life advocate PA and a woman who wants an abortion WA. PA: Why are you killing your baby? WA: Absolutely not. PA: What if I could offer you a way out of bringing another child into your family without your having to kill your baby? PA: Understood. So what if I could find a way for you to avoid having to bring home another child but without having an abortion? WA: Do you mean a miscarriage?

PA: No, I mean adoption. With adoption, you know right away that you do not have to bring home another mouth to feed. They will always be grateful to you for sparing the life of their child, and you can continue to live your life without the intrusion of another infant. What do you think? In theory, the pro-life advocate is making sense in the above hypothetical question. Abortion is unnecessary and deprives some deserving family of the opportunity to raise a child. By analogy, consider a person who says he wants to kill himself. We ask. Problem solved. Perhaps the person who is unhappily pregnant imagines that she has no choice but to raise the child if she gives birth to them.

The pro-life advocate offers a third way. The problem with the adoption option as an answer to a person seeking an abortion is that most people are aware of adoption. Unlike someone who is suicidal, moreover, the person who wants an abortion is not presumptively irrational or incapable of thinking about the alternatives. They therefore have selected abortion because they do not want to carry an unwanted pregnancy to term. But once one has decided that one does not want that finished product, the process of enduring a pregnancy and then labor and delivery or major surgery is no longer acceptable.

In other words, a person who wants to give birth to and keep a child may be willing to put up with the nausea and vomiting, the insomnia, the physical discomfort, the potential for serious health challenges like gestational diabetes, preeclampsia, autoimmune conditions, tearing during labor, and intense and extended pain. But a person who has no intention of keeping the resulting child no longer has a reason to undergo the many extreme hardships associated with pregnancy, and those hardships accordingly become highly relevant to the decision to terminate. Anyone—no matter her position on abortion—who briefly thinks about it will recognize that pregnancy and labor are extremely burdensome. To force a person to endure these burdens against their will really presses up against Thirteenth Amendment involuntary servitude values.

Like so many things, of course, when we want the end result, we might readily accept the sacrifices and suffering entailed in getting there. At the time, I could not get into a position in which sleeping was realistic, and even walking down the street was a challenge. Yet I did not mind because I wanted my baby. Were I suffering through the same pain and discomfort so that I could hand my baby to someone else, my entire outlook on the experience would have been the opposite of what it was.